Disclaimer: As the situation is changing so rapidly, and governments are making and updating their decisions so frequently, the below list could be outdated in the next 24-hours, both in scope of measures taken and in regards to which countries have enacted restrictions.

Over the last 24-48 hours, multiple countries have declared states of emergency and implemented travel restrictions and border closures. It should be anticipated that every country that declares a domestic state of emergency will also take steps to limit travel in or out of their territory, including suspension of visas, travel bans from impacted countries, border closures, and airport shutdowns. Additional steps are likely in the form of local and national lockdowns.

13 March – Spain has declared a state of emergency, which is expected to remain in place until at least 15 April. It is likely Spain will enact similar domestic restrictions as Italy in coming days or weeks. Madrid has announced the closure of all commercial establishments excluding grocery stores and pharmacies. Every city in Spain is likely to enact similar restrictions.

13 March – El Salvador has declared a state of emergency, which is expected to remain in place for 60 days. The country had previously announced that all foreign travelers seeking to enter the country are subject to quarantine for 30 days. The measure does not apply to diplomats or Salvadorian nationals and permanent residents. Universities and schools will close for 21 days. Public gatherings of over 500 people are prohibited. There are no confirmed cases of the virus in El Salvador.

13 March – Ukraine announced it would ban entry of all foreign nationals from 16 March for two weeks.

13 March – Bulgaria declared a nationwide state of emergency until 13 April. This will allow the government to close borders, issue travel bans, close schools, and permit police to take action against violators.

13 March – Panama has declared an indefinite state of emergency.

13 March – The Czech Republic declared that Czech nationals and permanent residents will be barred from leaving, and foreign nationals from entering, the country from 16 March. Restrictions for the latter will be in place for 30 days. Smartwings/Czech Airlines will also suspend all flight operations to and from Prague’s Václav Havel Airport (PRG/LKPR) from 16 March. The country previously declared a state of emergency, which is expected to remain in effect for 30 days.

12 March – The Philippines government announced a lockdown in the Metro Manila area, starting on 15 March. The entire metro area is expected to be closed to most types of land, air, and sea travel until 14 April. Ninoy Aquino International Airport (MNL) will suspend all domestic flights but will remain open for international flights.

12 March – Colombia has declared a state of emergency until at least 30 May. All public events with more than 500 attendees will be canceled.

12 March – Honduras has declared a state of emergency and banned travelers from China, Iran, Japan, South Korea, Europe and the United States. Restrictions do not apply to diplomats, Honduran nationals or permanent residents, who will be required to self-isolate for 14 days.

11 March – Ecuador has declared a state of emergency.

Countries around the world are starting to take serious steps to combat the spread of COVID-19. These range from full shutdown of airports, suspension of sports leagues, and cancelling of school to the total lockdown of outbreak cluster zones.

As COVID-19 spreads, more and more countries will institute travel restrictions both externally and internally. These policies are changing constantly as the pandemic evolves. The International Air Transport Association maintains a list of airline travel restrictions. 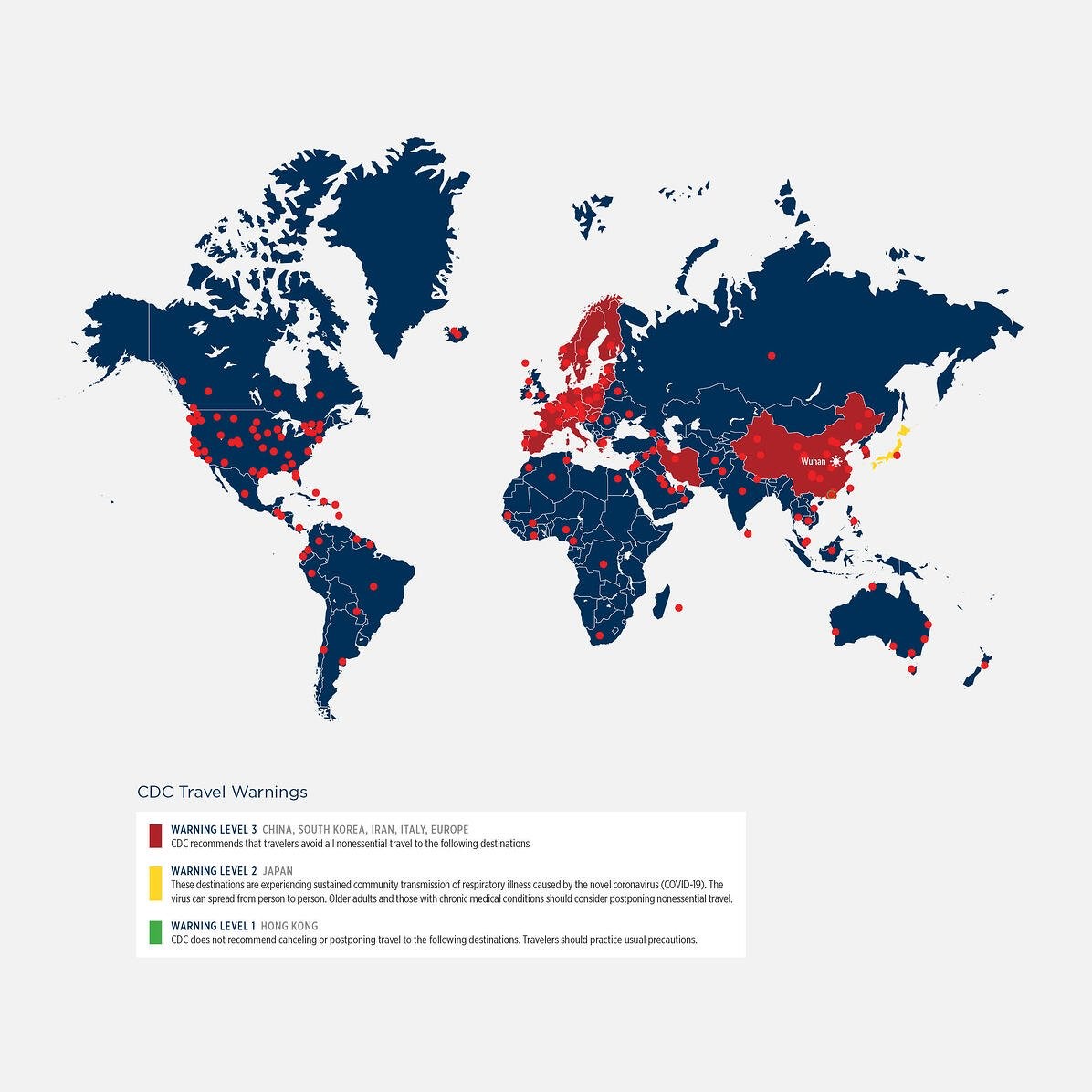 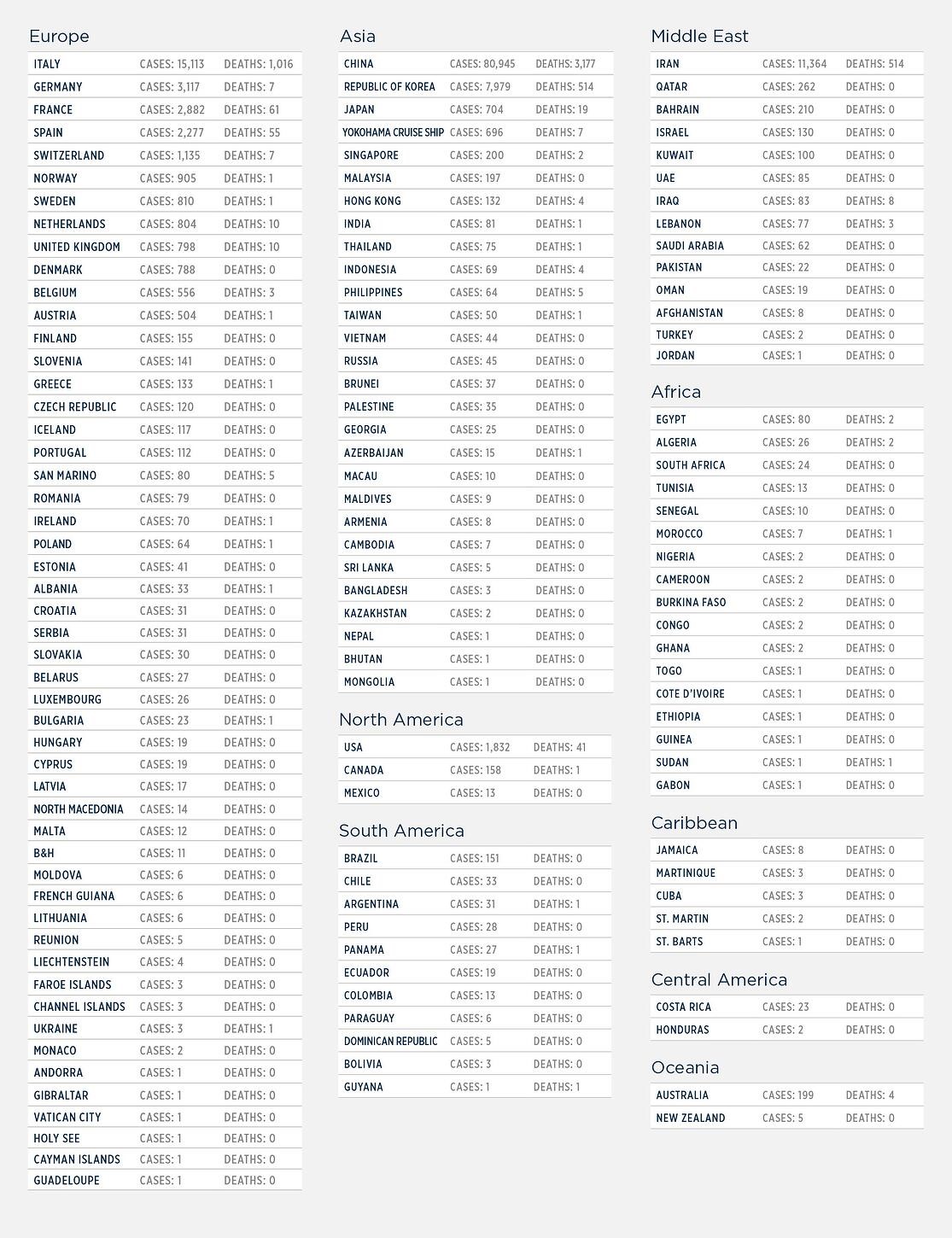 The U.S. State Dept. has issued Level 3: Reconsider Travel guidance for the entire world amid the COVID-19 pandemic. In addition, Global Guardian recommends the following:
• Avoid all travel to mainland China, Iran, Italy, South Korea, Kuwait, Lebanon, Israel, and any other countries with global travel restrictions.
• Strongly Reconsider all travel to continental Europe and the APAC region.
• Reconsider all non-essential travel to the rest of the world.
• Do not go on a cruise. Several cruise lines have already canceled all planned cruises.
• Practice advanced careful hygiene measures, including frequent hand washing and sanitizing.
• Practice “social distancing” while in public spaces.

The experience in Europe may serve as a glimpse of what is to come in the North America if the virus continues to spread. The U.S. and Europe need to be prepared for significant strain on economic and healthcare resources in the coming months.

See below graphs from Worldometers highlighting rapid growth of cases outside China: 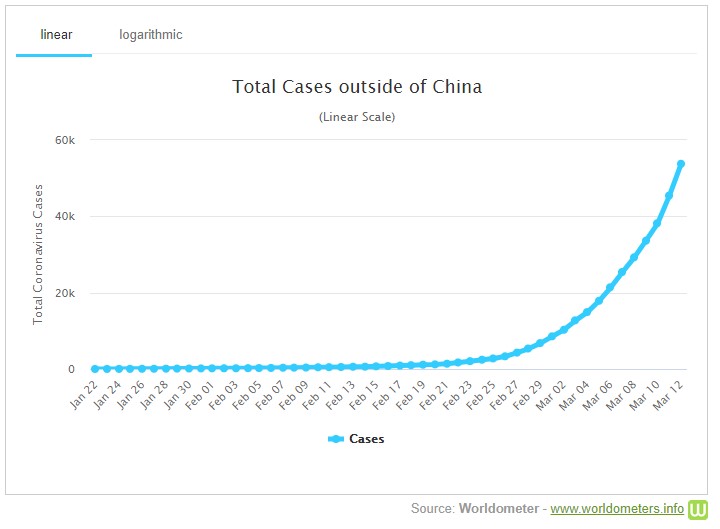 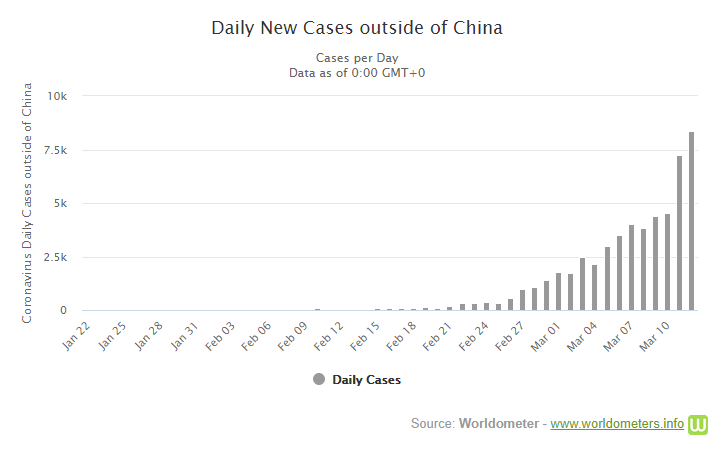